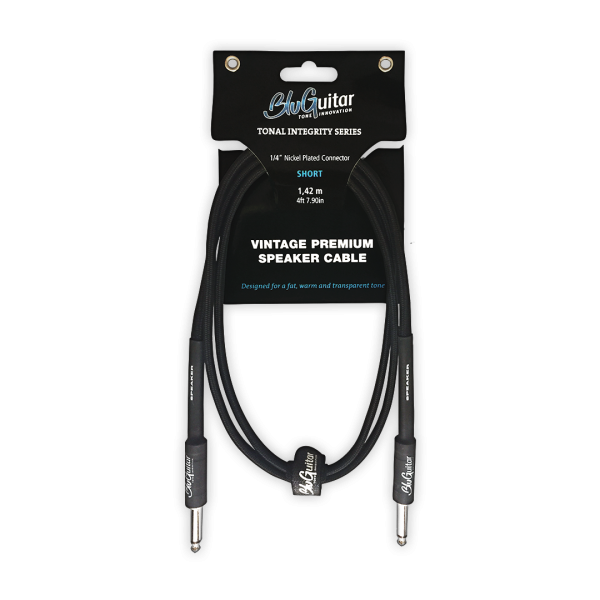 High quality speaker cable from the BluGuitar® TONAL INTEGRITY SERIES, specially developed for connecting the BluGuitar® AMP1™ to the BluGuitar® NANOCAB™, the BluGuitar® FATCAB™ or the BluGuitar® TWINCAB™. The Vintage Premium Speaker Cable delivers an audible fat, warm and transparent sound with the "magic" cable length of 1.42 m, even when used in combination with other guitar amplifiers and cabinets.

How did the cable come about? Here's Thomas's statement:
"Having used various speaker cables over the years without actually worrying about what kind of cables they were, somewhere along the line I made an interesting discovery purely by chance. I was using a relatively inexpensive Marshall speaker cable with moulded plastic plugs and noticed that my sound wasn't as constrained as it had been; it was rounded yet still light and airy. I needed to get to the bottom of this. I tested just about everything under the sun. Copper, standard hifi speaker cables, silver-coated cables, cables with differing cross-sections but also the high quality products of the well-known manufacturers. While they all came across more or less neutral in tone the sound was never as rounded as with the cheap, short Marshall cable. The “mojo” that gave the balanced sounds seemingly detached from the speaker cabinet was simply missing.
I mentioned my findings to a writer from one of the guitar magazines following a workshop and it seemed he had had similar experiences with this. Following our discussion he sent me a length of a Fender power cable produced in 1953. I soldered the 1/4inch jack plugs on and used it as a speaker cable. I discovered that this conjured up the rounded, warm and balanced sound I had always been looking for. Having analyzed the cable's structure and the number of strands braided in its core I set off to find something similar. Lo and behold, I found a cable where the diameter of the braided internal wiring was slightly higher than with cables already available. This was able to reproduce the sound I was looking for without any great compromise on quality and even over extended cable lengths.
But there was more, as I discovered when I had to shorten the cable a number of times. With the third shortening an amazing sound transformation occurred. I did not feel that this huge difference could only be down to the change in capacitance of the cable's shorter length. Only several years later did I hear of a theory which I had not come across before, which implies that there are given lengths for cables which lead to these simply sounding different. On the back of this I tested these magical lengths, with the result that I have now genuinely reached the ideal measurements for my speaker cables.
These two aspects and all I have learned about speaker cables are the basis for what we see as the BluGuitar ”Vintage Premium Speaker Cable” with its tonal integrity.”
- Thomas Blug